You are here: Home / Archives for News

Our 2021-22 school year began on Aug. 25th with a continuation of in-person learning at VVA. We are grateful to be in one of the countries of the world that has had consistent and courageous leadership to safeguard people from the COVID-19 pandemic. Because of this, VVA was one of the few schools in the world that was able to have in-person classes for most of the 20-21 school year. What a blessing! Rwanda continues to be a leader in Africa in vaccinations nearing 4 million first-doses administered representing almost one-third of the population.

We just reached the end of our first instructional quarter and were blessed to welcome VVA parents for teacher/parent conferences. We are grateful for the growing sense of parnership with our parents as we work together to support our students! In other exciting news, construction has begun on a new chapel designed by VVA alumni Asher Miller (’21). Asher is using innovative construction techniques that incorporate recycling and the use materials often discarded in other projects. The chapel is designed for small groups to use for devotionals, Bible classes, prayer, and meditation. If any parents or visitors would like to visit the construction site, please let us know and we will be glad to give you a tour! 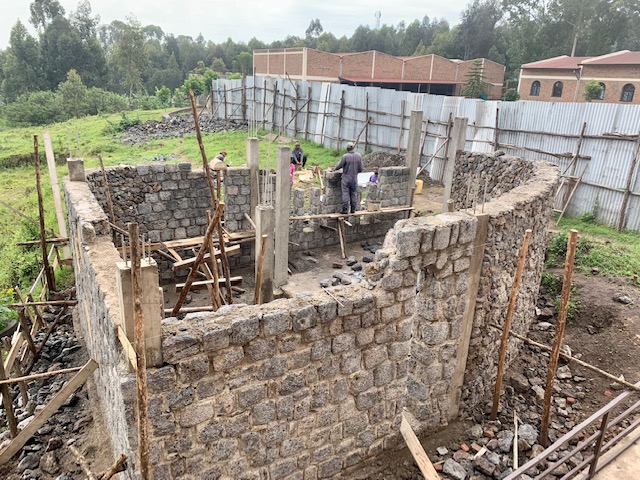 Finally, I am excited to announce the theme for the year developed by our Student Service Council. The them is “I AM” and focuses both on who God is and who we are because of Him. This theme is shaping our devotionals, assemblies, and even some of our house challenges this year, and helping us all come to a deeper understanding of the nature of God and our identity in Jesus. We have now been in our new school facility for more than two months, and we can see growth happening all around us! With the opening of the new school, we were able to add more than 10 students at the semester break, bringing our student body to almost 100. We are so thankful for this facility that has increased our capacity to be a blessing to our community!

More importantly, we see daily signs of growth in our students academically, socially, and spiritually. It is such a joy to see students sharing their creativity, insight, and faith with each other. We want VVA to be a place where students are challenged to grow holistically in an atmosphere of love and support. We believe this unique atmosphere will produce servant leaders who will impact the future of Rwanda and the world. We hope you enjoy our 2018-19 school picture taken in front of the VVA Library!

A Story of God’s Faithfulness As we prepare to move next month into VVA’s permanent home, I want to remind our school community how much God has done in the past two years to bring us to this place. In October of 2016, we had the opportunity to purchase a one hectare plot of land, the plot that our new school is being built upon. The only challenge was that we only had 1,000,000 RWF in our land development fund! Despite this, we made a down payment, telling the owner of the land that we had faith that God would provide what we need to complete the purchase. We even asked the land owner to lead a prayer asking for God’s provision! Three months later, we had all that we needed to complete the purchase! In the same way, God has worked through the generosity of countless individuals and churches to provide all we need to finish phase 1 of our building project.

We are on track to move into our new school buildings on December 15, and plan to begin our new term in January 2019 in our new home. Let’s all stop for a moment and say thank you to our powerful, generous Father who has made this possible, and pray that he would help make VVA a place that fulfills our vision: Developing obedient disciples of Jesus who transform Rwanda and the world through academic excellence, growth in character, and service. The fourth grade watching the film adaptation of Because of Winn-Dixie.

Over the past eight weeks or so, the fourth grade readers and writers have been studying the realistic fiction literary genre. The realistic fiction novel we have been reading is called Because of Winn-Dixie, a story about a lonely girl who moves to a new town, adopts a stray dog whom she names after a grocery store, and befriends a series of unlikely characters who all end up a little less lonely thanks to the dog that brings them together. During this study, we have participated in regular collaborative discussions and literature responses, using text evidence to support our answers in discussion and writing. We have also been walking through the writing process to create our own realistic fiction narratives, which we will be publishing and sharing with one another soon! I love seeing students grow in the processes of writing. The first writing we did this year was a personal narrative. We are presently in the middle of our second piece of writing, story writing. The students are learning that writing is a longer process than they think. We learned a short chant that helps us memorize the steps of the writing process. It includes: brainstorming, writing a rough draft, editing our work, publishing, and adding a picture. We use bubble maps for our character development and story maps to help us plot out the beginning, middle, and end of our story as well as helping us to make sure there is a problem to be solved.

I love seeing the creativity and watching them add details to their stories to make it interesting for the reader.

The skill of being able to write well is so important for them to learn from a young age. Great writers come from great thinkers. Great thinkers make great communicators. I hope that they can grow their writing skills this year and as they get older!

Blessings from Mrs. Andrea and the 2nd grade! High School are working on a group project.   Team Rwanda very kindly donated two bicycle wheels to VVA for their project and the High School have split into two groups and are working together to design their own wheel.  Both wheels are very different but very colourful and look great.

Grade 1, 2 and 4 are working on cartoons.  Each year group have been copying cartoon characters and are now working on designing their own character.

Grade 1 have also made some amazing African Masks which are bright and colourful and look great.    They wanted their designs to represent how they felt about God and so they included crosses and bright happy colours. 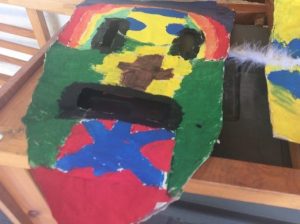 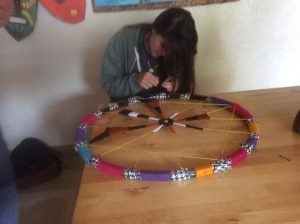 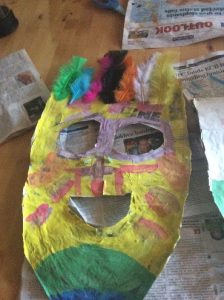 One major objective is learning to “listen and obey”.  When well learned, this lesson is rewarded with Fanta and popcorn from the “Good Teacher / Fairy”! 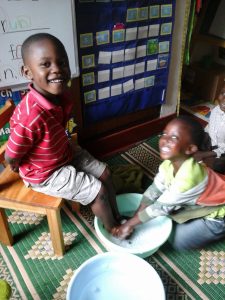 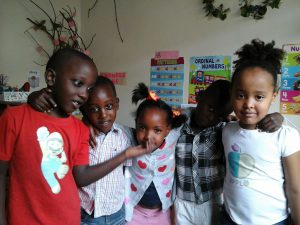 The VVA Student Council is a strong force for service. It organizes the monthly Movie Nights, Hospital Visits, and puppet shows that are put on at Muffin Chapel from time to time. Most recently, the Student Council has been working on building a shelter for pigs at a boys’ home near VVA, I.B.I.B. The Student Council’s Spiritual Director, Tresor, first had the idea to provide two pigs for the boys so that they would be able to make some money. From that idea, the Public Relations officer, Asher, designed the shelter in which the pigs would live. The President, Aidan, and the Secretary, Mollie, have been integral in organizing fundraisers and goals to meet in order to have enough resources and time to finish the project. The Vice President, Matthew, was vital in collecting the supplies and transporting them to the boys’ home.

The Student Council members have shown their strengths and diversity during this process. A few of the members demonstrated remarkable work ethic, whereas others displayed their organizational skills. The shelter itself took two mornings to complete, and on each of those days the boys living at the home present were more than willing to pitch in and help in the construction. The combined willingness and teamwork of each of the members of the Student Council made this project possible, and even more so efficient. It is incredible the amount of work and service that can get accomplished when a group of Christians decides to effect change. The Student Council is inspiring, and I look forward to seeing the many ways they contribute to their community as a group and as individuals in the future.