Two of our recent Social Studies units in 2nd grade have helped our students learn a very important lesson: Women can change the world! The first unit focused on people who changed the world, and several of the historical figures studied included strong women who made a big difference in the world, many of them during a time when women were not given equal opportunities. These included Florence Nightengale, who transformed the practice of nursing and Emelia Earhart, who was one of the pioneers of long-distance flight.

During our economics unity, our study of the economy of Musanze culminated with a visit to two local businesses, La Paillotte and Volcana Lounge, both popular local restaurants run by women (and VVA mommas Bela and Fanny)! The girls were excited and inspired to learn that women can start and manage businesses. It is our hope that seeds have been planted in their hearts that will help them to dream big and change the world in their own ways in the future! Back in February we had a fun afternoon celebrating 100 days in First Grade. With all the learning that goes on at V.V.A. we couldn’t help it, we were 100 days smarter!

In Math we have learnt new strategies to add and subtract; in reading we are using expressions and working out new words independently; we are becoming fluent writers and we have learnt a lot about the world around us- how things move, how different cultures celebrate and how animals survive.

It hasn’t all been about new information though.  We have also become smarter thinkers.  We have learnt to observe closely, compare others ideas with our own, make predictions based on the information we have and be creative problem solvers.  Great skills that we can use throughout the rest of our education and life!

Having a ‘smart heart’ is just as important – In Ephesians 4:32 it tells us to ‘be kind and loving to one another’.   What a great difference we can make in our community if we can think and act ‘Smarter’!

By the end of the year we will be close to 160 days smarter so look out 2nd Grade – here we come!

Raising Up Future Innovators of Rwanda We hope to plant seeds of innovation and entrepreneurship in our students so that they contribute to the development of Rwanda. If you ask the VVA primary and secondary students what the highlight of the year has been for them so far, most likely someone will mention our field trip to the Winnaz Potato Chips factory.

Winnaz is a local start-up that is producing high-quality potato chips right here in Musanze. Our students were able to visit the factory and learn about how locally grown potatoes are transformed into delicious chips.

At the end of the visit, workers from the factory brought out several platters piled high with chips that our students quickly made disappear!

There was a purpose to this trip beyond an enjoyable outing and filling our student’s bellies with potato chips. We wanted to show our students that products like potato chips, which are often imported from other countries, can actually be produced in Rwanda using local materials.

We hope to plant seeds of innovation and entrepreneurship in our students so that they contribute to the development of Rwanda.

We believe VVA students will be among the future leaders of Rwanda and are excited to see the contributions they will make! For the past two weeks in Preschool 1 we have been talking about how to be safe and healthy. We have covered topics like nutritious eating, hand washing, covering our cough and sneeze, and brushing our teeth. In one center, the students have enjoyed dressing like doctors and administering care to each other. In math we are working on identifying patterns. We have looked for patterns we can see and listened for patterns we can hear both in the classroom and outside in nature. We continue to work on letter recognition, syllables, shapes, colors and counting. I am proud of each of my student’s progress. What does a good learner do?

Super Hero Learners (as we like to call them) are ready to learn, listen, ask questions, take a risk and don’t give up even when learning is tricky.

It is hard to believe that the first semester is nearly over for this school year.  As the newcomer to VVA I have loved this time of getting to know the children and the wider school family.

First Grade has lived up to their reputation of being a great bunch of children!  They love learning about anything and everything and can be heard talking and sharing with others, even over lunch eating!  “Did you know you’re eating a seed” says Jonathan after learning that corn and peas are seeds during our plant study.

The children enjoyed our Science focus on the Earth earlier this semester.  We learnt about different landforms and created fantastic paper models.  We also got to explore rocks, different types of soil and found out how and what effect there is when land changes through erosion and weathering.

One of the most important questions we have talked about in First Grade this semester is, ‘what does a good learner do?’  Super Hero Learners (as we like to call them) are ready to learn, listen, ask questions, take a risk and don’t give up even when learning is tricky.  We try really hard to put these into practice and what great character traits to learn now as we know we never stop learning! During our “Community Helpers” study Dr. Franklin and Mama Frank explained doctor visit procedures, and allowed the children to listen to their heartbeats. It was not only educational, but it put the children at ease to understand what the doctor does and why.  They do not need to be afraid.

On a tour of the Kanimba Clinic the children especially enjoyed visiting the dental and eye doctor offices.  However, the highlight of the tour was sitting in an ambulance. 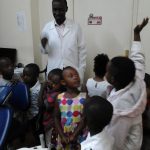 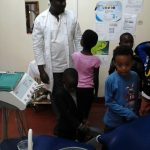 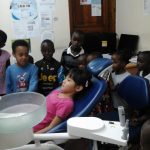 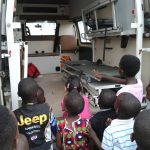 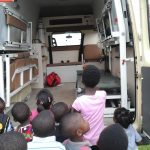 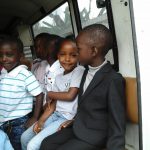 The Renaissance was a big subject in the 8th Grade’s study of history this semester. One of the most well-known artists during this time was Michelangelo.

Perhaps his most famous painting was of the Sistine Chapel. This impressive work of art spans the ceiling of the giant dome inside this structure.

If Michelangelo could do it, then so could the 8th Grade class at VVA. And so we “painted” the ceiling of our classroom.

The kids decided to depict a world in which each of them (and me) created his or her very own nation. We each carefully crafted large continents, adding special features that made the different lands individual. Across the world, you can see mountains, volcanoes, rivers, islands, farms, cities, castles, and even armies going to war. Not only was this a lesson in Renaissance painting, but also in geography!

This Michelangelo ceiling painting activity was a delight to watch as it developed over the course of about two weeks. I was able to see each student’s ideas and creativity come to life on the paper. I was also able to see how they worked together in some ways and in others were competitive in what they could accomplish in their nation.

Stories unfolded onto the paper as trade ships traveled to other nations, some trade cities were raided, and armies crossed the seas to wage wars on others.

Overall, the students seemed to be highly engaged in their work, and they will not forget the story of Michelangelo any time soon.

If everyone could take the mindset my kindergartners had about impacting the people around us in whatever situation we find ourselves, our communities would certainly be better places.

It is fascinating to hear about what young children want to be when they grow up. There is always a wide range of answers, but these answers also usually have something in common. From astronauts to veterinarians, from doctors to policemen, children usually want to become community workers.

In our class alone, we have a future baker, vet, doctor, and policeman. We have been learning about community workers in the kindergarten class, and it should be no surprise that the answers turn out to be so similar. These workers have a huge impact on the community, and they are very visible when we go to a restaurant, get sick and have to visit the hospital, or see policemen handling the scene of an accident.

But do the kids in kindergarten have to wait more than a decade to start helping their community? Of course not! Not only did we talk about how workers help the community, but also how kindergarten students can already impact the people they come into contact with.

It was very encouraging to hear the ideas brainstormed in class about how a kindergartener could be a community worker. For example, one of the students suggested that she could help a person carry a heavy load. Another student said she could comfort a friend whenever something bad happens. If everyone could take the mindset my kindergarteners had about impacting the people around us in whatever situation we find ourselves, our communities would certainly be better places. 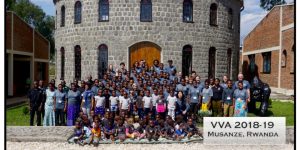 A Growing School We have now been in our new school facility for more than two months, and we can see growth happening all around us! With the … END_OF_DOCUMENT_TOKEN_TO_BE_REPLACED 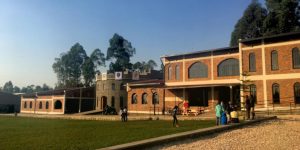 A Story of God's Faithfulness     As we prepare to move next month into VVA’s permanent home, I want to remind our school … END_OF_DOCUMENT_TOKEN_TO_BE_REPLACED

More Posts from the Director